While we couldn't end last term's screenings with Lady Bird, it seems rather fitting - having seen the movie - that it is now, instead, the film to kick off the new one. Greta Gerwig's strong solo directorial debut deals with the coming-of-age story of high school senior, Christine McPherson (Saoirse Ronan), who goes by the self-given moniker "Lady Bird". Seemingly stuck in Catholic school in boring Sacramento, California, the film offers a glimpse into her life as she makes her way through a year of first loves, new friendships, and, of course, her family, all with college looming just over the horizon. Lady Bird is a truly great film, and it is as wondrous as it is relatable.

The trailer is a bit spoiler-y, but if you want to watch it anyways, click here. 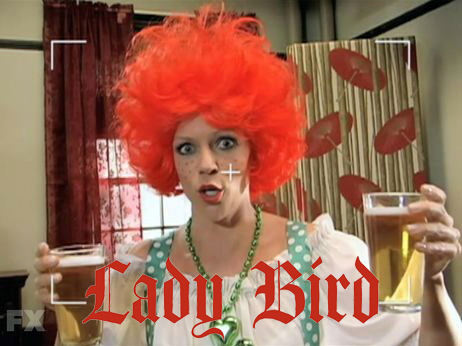 One thing the film looks to do is to examine the relationships we share as teenagers, and the resulting struggles of fitting in. In an interview with NPR, director and co-writer Greta Gerwig said, "I wanted to explore the fact that I think when you're a teenager, you're trying to figure out who you are through the refraction of other people. It's reaching for a definition of oneself through relationships and sometimes rejecting the ones that are close to you because you are sure that someone else is better; someone would reflect a better self to you. It's like that wanting to be reflected back as cooler than you are somehow."

As a result, Lady Bird's character is slowly revealed through these reflections over the course of the movie, flaws and all, and we are able to understand her better. To Saoirsie Ronan, who plays Lady Bird, this understanding is important. Speaking to The Independent, she said, "It shows that a person can have flaws, and not be perfect, and still be really special. And have something to offer. And still be a good person, you know? Because one of the things that I got from watching it as an audience member was just that, everyone's dealing with their own stuff. Everyone has an issue, everyone has sadness, and even if you don't see that straight away, it doesn't mean it's not there and it doesn't exist for someone. So, it's a really empowering thing."

Speaking of empowering, Gerwig hopes that Lady Bird inspires more women to be filmmakers, the same way directors such as Sofia Coppola inspired her. In an interview with The Guardian, she said, "I remember very well when Sofia Coppola was nominated for best director and won best screen play (for Lost in Translation) and what that meant to me. And I remember when Kathryn Bigelow won for best director and how it seemed as if possibilities were expanded because of it. I genuinely hope that what this means to women of all ages - young women, women who are well into their careers - is that they look at this and think, 'I want to go make my movie.' Because a diversity of story tellers is incredibly important and also I want to see their movies. I want to know what they have to say! So I hope that's what it does."

We’ll be showing Lady Bird at 19:00 on the 1st and 3rd of May; you can get tickets at the door from 18:45. Oh, and don’t forget to read part II at the end of the week for a more in-depth review with spoilers.